The first country to legalize pot is taking it slow 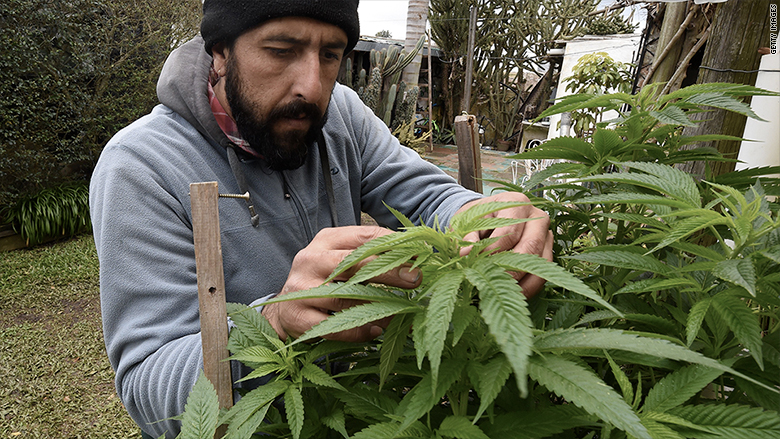 The first country to legalize recreational marijuana is still going through growing pains in setting up its market.
Uruguay, which legalized the drug nationally in 2013, is in no rush. The Latin American country wants to do it the right way, and that means, at least initially, a lot of restrictions.

“They’re very aware that they’re the first in the world to do this,” said John Walsh, director for drug policy and the Andes at the Washington Office on Latin America. “They’ve run with a tightly controlled model to show the world that they have control over the system.”

That heavy handed approach means only around 14 pharmacies in the entire country sell marijuana. Most of them are clustered around the capital, Montevideo. Many other pharmacies are weary of getting into the pot-selling business, primarily because of a major financial hurdle.

Teething problems
Pharmacies across the country act as points of sale for pot that’s been grown by just two state-licensed companies, Symbiosis and Iccorp. Buyers can purchase up to 40 grams per month. As of May, there were 24,324 registered buyers, according to IRCCA, the state department dedicated to the regulation and control of cannabis.

But because Uruguay’s economy runs on dollars, most pharmacies are routed through US banks. Those banks are forbidden by US law to serve accounts that “involve the manufacture, importation, sale, or distribution of a controlled substance.”

“The big US-based banks sent a memo to their Uruguayan counterparts, telling them they’d have to close their accounts if they proceeded,” Walsh said.

The existing pharmacies are left to resort to cash-only transactions, similar to the situation in US states like Colorado and Washington, which are managing legal marijuana industries of their own. It’s also a deterrent for other pharmacies that might have otherwise jumped on board.

Continue reading the article at CNN