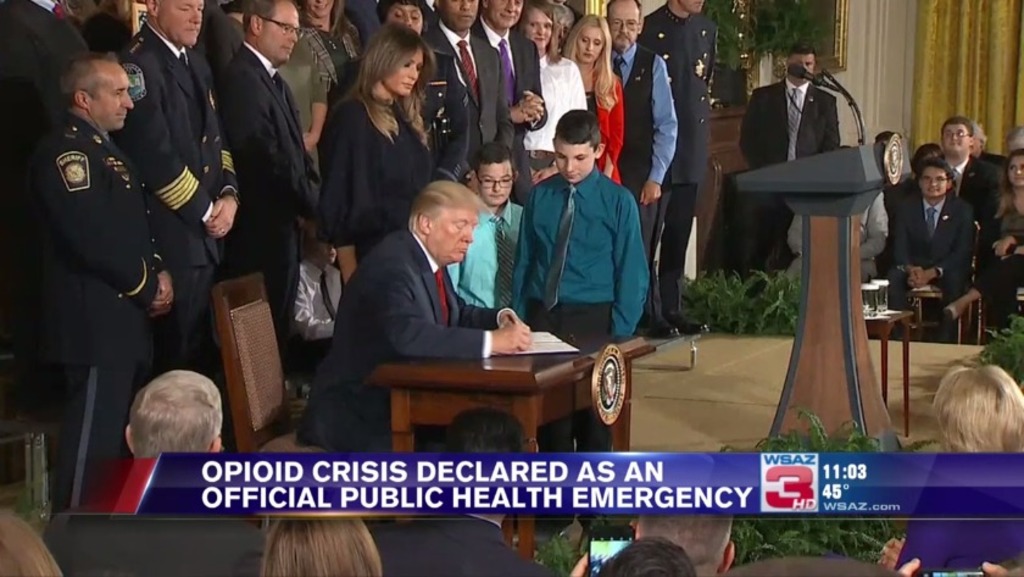 President Donald Trump recently declared the U.S. opioid epidemic as a national public health emergency calling it as the “worst drug crisis in American History”. In a speech from the White House on October 26, the president ordered the executive government to “use every appropriate emergency authority” to fight the crisis. He further adds that “ending the epidemic will require mobilization of government, local communities, and private organizations. It will require the resolve of our entire country…”

As enumerated by Politifact, by declaring a national public health emergency on the opioid crisis, the federal government can:

Trump also said his administration would announce a new policy to allow treatment at more facilities.

“As part of this emergency response, we will announce a new policy to overcome a restrictive 1970s-era rule that prevents states from providing care at certain treatment facilities with more than 16 beds for those suffering from drug addiction,” Trump said.

Some critics felt that the declaration fell short of the expected designation of national emergency under the Stafford Act, which would have allowed the use of money from the federal Disaster Relief Fund to tackle the crisis. Moreover, some concern that the declaration may not be as effective and could even start a funding feud in Washington especially since the sum that’s left in the United States’ Public Health Emergency Fund is just $57,000.

A Congressional Research Service Report in 2008 shows how the fund got so low. Apparently, Congress began the fund in 1983 with an initial $30 million allocation and retained the authority to replenish the fund back up to the $30 million level each year. In 1990, Congress pushed the limit up to $45 million. However, since 1993, though the government kept using the fund, Congress has not deposited any more money into the fund, which has resulted in the balance sinking to $57,000. The Trump administration said that there are ongoing discussions with Congress about securing more money for the fund but have not divulged any specific dollar amounts.

Gary Mendell, founder and CEO of Shatterproof, a national nonprofit organization dedicated in combating addiction, reacted to the Trump declaration with the following statement:

“President Trump can call the opioid crisis whatever he wants. The most important thing will be how this declaration is implemented and how quickly he takes action. It will require laser-like, business execution by the Administration to take the necessary actions to save lives. We obviously need more funding to fully address the epidemic. But there are many things that can be done without funding, including implementing the CDC guidelines, setting higher standards for treatment and changing FDA labeling of prescription opioids.”

The government will need to find a solution on the funding problem soon and figure out how to pay for everything, whatever that ‘everything’ may turn out to be.

According to a Center for Disease Control and Prevention (CDC) report published in Medical Care, the economic burden of the opioid crisis is estimated at $78.5 billion with $28.9 billion coming from increased health care and substance abuse treatment costs.

In 2016, an estimated number of 64,000 Americans died of drug overdose nationwide. That is 142 people lost each day likely due to opioid.

This crisis has long been overlooked. Besides loosing so much to drug overdose, part of the crisis are the innocent victims—the children born to addicted parents who are at risks from their first breath. According to another CDC report, in the last 15  years, the number of babies born to addicted parents has tripled. Furthermore, three of four new heroin users report abusing opioids before using heroin.

By declaring the opioid crisis as a national public health emergency, is a step towards stopping this cycle of tragedy. Not only did it addressed the effects of addiction, but also outlined preventive measures to avert people from becoming addicted in the first place.

Prevention begins with early education. Educating our kids can take many forms. Ideally, it should start with the family. Community-based initiatives on the dangers of addiction and the many forms it can take, can help in preventing people from sliding down the slippery slope. Besides education, there must also be the availability of the necessary resources and assistance to those addicted and those in recovery. It is common for addicts to relapse and fall back into a cycle of drug abuse due to lack of support and inability to re-enter their communities after rehab or incarceration. Because addiction is a disease, not a moral failing, we must treat it as such.